Functions and Duties of the Deputy Commissioner's Office. 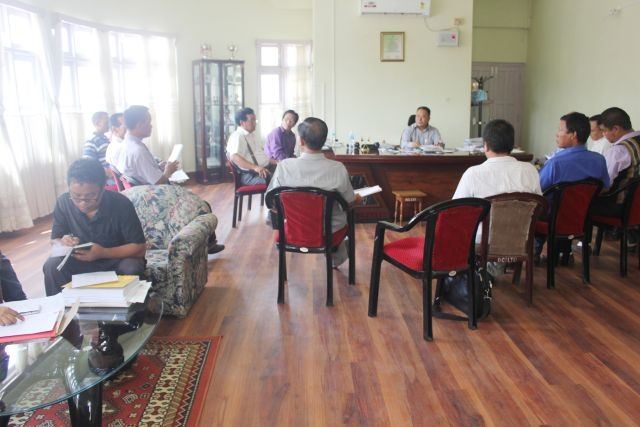 The Deputy Commissioner's office mission is to provide a committed, accountable, transparent, responsive and effective district administration for the people.In order to fulfill this mission, this office has got divided and organised into various functions and routine works of the Office fall under following descriptions viz : General Administration, Maintenance of Law & Order, Administration of Justice, District Planning & Development Implementation, Relief & Rehabilitation, preparation of Electoral Rolls and conduct of Elections, Co-ordination of Departmental Programme, enforcement of Inner Line Regulations, Protocol and Celebration of important Days and implementation of MPLADS. This office, being the Office of the Deputy Commissioner, Lawngtlai is headed by the Deputy Commissioner, Lawngtlai who supervises and controls the entire functioning of the various Branches in the office.

The organizational structure of the office is divided into various Branches as follows:

The citizens can also apply for certain certificates as follows:

The office is also in charge of the implementation of MPLADS both Lok Sabha and Rajya Sabha. The Hon’ble MPs communicate their recommendation of works to the DC from their annual entitlement of 5 crore per annum. The office ensures that works recommended are as per Guidelines, selects Implementing Agencies and releases funds for the works. The office also ensures that works are properly executed and documented. In the same way, the office also implements works under MLALADS within the district. Both these Schemes are carried out by the Planning Branch of the office.

LAW AND ORDER: One of our most important vision is to promote and maintenance of peace and tranquility in the district. The Deputy Commissioner of the District is also the District Magistrate. Therefore, maintenance of Law and order is the joint responsibility of the Deputy Commissioner of the this district and Superintendent of Police, who head the Police force in the district. This office deals with administration of Justice as well as enforcement of law and order within the District, including matters relating to duty of Executive Magistrates including conduct of Inquiries by Magistrates, as well as granting permission for public activities, etc. It receives and entertains complaints from individuals, organisations and government departments on various issues varying from land encroachment, unauthorised quarrying, fake banking and dumping of soil and debris and other cases which are civil in nature. Such complaints are disposed off and settled by issuing instructions/prohibitory orders depending on its nature. Initiatives for negotiation, agreement etc. are initiated by Executive Magistrates during the outbreak of conflict between groups of people or in cases of communal conflict. The office also conducts magisterial enquiries in cases of custodial death and other cases of unnatural death.

ELECTION: The main functions and duties of Election Branch is to conduct Elections to Members of Parliament/Mizoram Legislative Assembly under the Election Conduct Rules, 1961 and the instructions, guidelines issued by Election Commission of India from time to time. Besides these Elections, the District Election Office is also responsible for conducting General Election to Lawngtlai Autonomous Council and Chakma Autonomous Council by using Electronic Voting Machines.

The other main function and duties of the District Election Office is the conduct of Revisions of Electoral Rolls i.e. Intensive, Summary, Special Summary as the case may be from time to time.

LAND ACQUISITION: Land acquisition in India refers to the process by which the union or a state government in India acquires private land for the purpose of industrialisation, development of infrastructural facilities or urbanisation of the private land, and provides compensation to the affected land owners and their rehabilitation and resettlement.The Land & Buildings Branch of the DC’s Office, Lawngtlai is the nodal branch in respect of all matters related to lands and buildings within the jurisdiction of Lawngtlai District. The main functions and duties are as follows:

ARMS and EXPLOSIVES: The Arms Act, 1959 is an Act of the Parliament of India to consolidate and amend the law relating to arms and ammunition in order to curb illegal weapons and violence using illegal weapons.The Arms Act was passed in 1859,which made it impossible for most Indians to own weapons,to ensure that of there were another Indian uprising, it would be less effective. The Act has undergone many changes since 1959, the most recent being in 2010 through an amendment for the Arms Act. There was also controversy around air guns to be included as part of this act which was rejected by the Supreme Court of India.

The office deals with issue of fresh Arms License, Arms Repairing Licenses, NPB Arms and Ammunitions Dealers Licenses as per approval of Home Department, Govt. of Mizoram, maintenance of Record and Registers of Arms License separately for different categories, Issue of Explosives License (possession for own use)to stone Quarry owners, Contractors, NGOs and different Govt. Agencies as per Explosives Rules. NOCs are issued to persons who apply for License from Chief Controller of Explosives for installation of Petrol Pump, LPGs, and Magazines etc. Renewal of Arms Licenses, Issue of Permit for purchase of Arms to Arms License holders, Permit for purchase of Ammunitions, Permit for Carrying of Arms, Issue of Duplicate Licenses and License for Retainer of Arms are also deals with in this Branch.

DISASTER MANAGEMENT & REHABILITATION: The office deals with relief and rehabilitation of victims of Natural Calamity such as as landslides, fire, earthquakes, heavy rains, floods, hailstorms, etc., giving immediate relief in the form of financial assistance, disbursement of materials like GCI sheets and Silpaulin sheets etc. Whenever any natural calamity occurs, officers are detailed for spot verification and hands out aid to victims based on the reports of the Officers. The District Disaster Management Plan has been prepared. Zonal Officers are appointed for all area within the region. These officers can readily be contacted in case of any disaster though Village Council leaders.

NLUP: The chief aim of the New Land Use Policy (NLUP) is to develop and give all farmers in the state suitable, permanent and stable trades. The Policy also aims at to give all the Village farmers self sufficiency in rice, vegetables etc. and give them help in money with necessary guidance. With the launching of the flagship programme of the Government of Mizoram – New Land Use Policy in Mizoram, the Deputy Commissioner, Lawngtlai District is appointed as Chairman of District Level Implementing Committee, District Level Monitoring Committee, District Level Infrastructure Committee, etc. The main task of this office in respect of NLUP includes finalising of District, Cluster & village Abstracts, incorporating with all beneficiary lists within the district. This Office is entrusted with implementation and monitoring of NLUP within the District.

PUBLIC DEMANDS RECOVERY: The recovery of Government dues is made through certificate. As per the Mizoram Public Demands Recovery Act, 2001 the SDO (Sadar), who is also the Certificate Officer serves notices upon debtors for recovery against any arrear or money payable or due to the Government or to any scheduled Bank or Financial Institution approved by Reserve Bank of India.